Gloria Macarenko, this was your Prince Rupert life…. 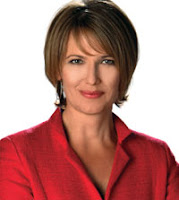 The Daily News, good to their word published the promised profile on Tuesday, of Gloria Macarenko’s homecoming visit to Prince Rupert and a stop in at Charles Hays Secondary School.

While she was in town for the Community Foundation Dinner, The Daily followed the CBC newscaster around the school as she reminisced about her times in Prince Rupert and offered up some career and life advice to the students of the east side school.
.

Since the age of 15, Gloria Macarenko has known she wanted to be a journalist. At the time, her ambitions were modest, and the world of print journalism was where she wanted to work after she graduated from Prince Rupert Secondary School.

She was a hard worker both in and outside of the classroom, holding down various jobs throughout her adolescence in Prince Rupert that saw her selling jeans and flowers, waitressing, and doing her own newscast each hour on CHTK Saturday and Sunday mornings.

“I’d get up early in the morning to rip all the wire copy and do interviews over the phone,” said Macarenko last week, speaking to Mr. Scott’s Grade 11 class at Charles Hays Secondary School while she was in town to support the Prince Rupert Community Foundation’s weekend fundraiser.

“I had to program the computer and literally take an old vinyl record and back-time it so it would end just at the top of the hour. Then I would read my newscast and it was back to programming, and I was by myself in the studio at 16 years old doing this on the weekends here.”

It was around that time that Macarenko heard about a provincial contest to come up with an idea for a new drinking and driving counterattack ad campaign, the winner of which would receive a scholarship to BCIT to study broadcast journalism. She thought it was perfect for her and recorded her own ad on tape, a Star Wars-themed project with the catchphrase “Think Before You Drink,” which would ultimately land her the education of her dreams.

“They used that catchphrase in their counterattack campaign, and the tape I made went around to schools throughout the province and was played for students, especially around graduation time.” She said. “I also got to go speak to some schools about my project, I was flown down to Vancouver and had lunch with the Attorney General in the legislature, and most importantly, I got a ticket straight into broadcast school right out of high school.”

The program was an intense introduction to the field. Compared to today’s technology understanding the old technology was also more complicated – and the course involved a lot more heavy lifting.

Upon graduation from BCIT, Macarenko found immediate employment as a radio journalist in Vancouver, and within her first two years had the opportunity to interview then-Prime Minister Pierre Trudeau and sit in on her first court case, the trial of serial killer Clifford Robert Olson.

“We didn’t even know there was such a thing as a serial killer at that time, but children had started going missing around the Lower Mainland and nobody knew what was going on,” she said. “One of the most difficult interviews I had to do as a young reporter was go to the families of one of the boys who was 11 years old and talk to his parents about how they felt. And I remember the first day he was in court, they read out the charges which were essentially 11 counts of murder, and he just shrugged and actually laughed. Those are the kind of moments that stay with you,”

Realizing she needed to explore more of the world, she decided to spend several years in Europe, learning languages and teaching English. Eventually, she made her way back home to Canada, and auditioned for a position in front of the camera with the CBC in Vancouver. She already had a ticket booked for Australia at the time, and made up her mind that if she didn’t get the job she would take off for the land ‘down under.’ Fortunately, the job felt right and the people at CBC knew they had someone special. Although she started out doing the weather, she’s basically been in the same position for almost 20 years, and loving every minute of it.

One of the most memorable events of her career came during one of the evenings when she was filling in as anchor of The National news broadcast from Toronto. Just as the program was ending she got a note that a plane had gone off radar just off the coast of Nova Scotia. Sure enough, it ended up being Swissair Flight 111 and it had indeed crashed, killing everyone one board.

“We stayed on the air from that moment until around 2:30 a. m., and I didn’t leave that seat the entire time,” said Macarenko. “I remember just scribbling questions down to ask all the people we were interviewing live on air. When we started The National that night there were 10 for 15 people working in the studio, and by the time I finally left, there had to be 150 people that had come in and were busy working.”

And there have been many other exciting, heart-wrenching, funny and unforgettable moments along the illustrious path of her career, probably more than she could ever hope to remember. However, she knows the importance of having life goals, and stressed to the Prince Rupert students she spoke with that some of the keys to future success are flexibility, combined with the ambition and determination to ensure you end up where you want.

“I’ve never woken up in the morning and not wanted to go to work. I love being the first person to know about things, and I get to be the person that tells everybody each night,” she said. “It’s been a really great ride for me, and I tell my children that all I wish for them is that they find a job that’s as fulfilling as mine has been.”
.
Above Photo from the CBC website
Posted by . at 9:15 pm