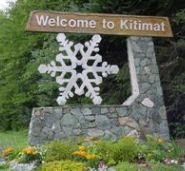 “If this council is going to work, we need to have better communication between each other.” -- the comments of Kitimat councillor Richard McLaren to Kitimat council, an opinion that apparently is easier to suggest that it is for council to practice.

When the going gets tough, the fingers get to pointing!
While Kitimat tries to come to grips with the closure of one its major employers, which as we mentioned on the blog yesterday threatens to reduce its population by almost half, the council it seems has lost its focus on the job at hand.
A minor revolt seems to have broken out on Kitimat council after an appearance by Kitimat Mayor Joanne Monaghan in Victoria, part of a session to discuss economic initiatives in Northern British Columbia.
The Northern Sentinel provides the latest overview of the hard feelings and obvious split on that city's council, where talk of ambush and shock seems to dominate the course of that elected assembly.
The breaking point for Kitimat council it seems, has been the commentary attributed to the Mayor during the viewing of two slides during that Victoria presentation, a showing that has caused a rift on the Kitimat council, with Councillors Gerd Gottschling and Richard McLaren among those that took offence to her talking points.

Appearing at a conference of the Northern Development Initiative Trust last month, the Mayor it seems offered up opinions that indicated her support for the modernization of the Kemano power house, a topic that threatened to tear the community apart a few years back. She also commented on the prospect that Kitimat may take over the Eurocan dock with the pulp mill closure in place. Issues that Kitimat's council apparently had not approved or discussed it seems as far as part of her presentation to in Victoria.
Kemano is apparently still a hot button issue despite the fact that most everyone has moved beyond that project which hasn't been on the agenda since the last battles were fought, a project that even Alcan seems to be talking about in the past tense, suggesting that the project cancelled in the mid nineties is now part of history .
Still, any mention of Kemano apparently brings back all the old animosities and that seems to be what has resulted from the Mayor's slide show in Victoria. Indeed, all sorts of accusations seemed to be flying around Kitimat's council chambers on the 25th of January, as fingers were wagging and tempers flared as they relived some of the emotional times of the debate over Kemano of the last decade.
Things have apparently become so heated that there are even suggestions that Kitimat's family feud is proving to be something that has off shore investors thinking twice about putting their money into the community, a nice bit of hyperbole that should add more fuel to the ongoing fire.
Much of the drama has played out on a Kitimat website, Kitimat Daily, which offers up a number of posts on the tempest that threatens to take Kitimat's council away from the job at hand, that of rebuilding their community with the closure of Eurocan.

February 8-- You may now shoot the messenger
February 1-- Monaghan, McLaren and KTIDS - 3 peas in a pod
January 27-- Just who is putting words in the Kitimat Mayors mouth???
January 26-- City Council: January 25th, 2010: The long and short of it
While Kitimat's council spends its valuable time bickering, you have to wonder if its residents might not hope that they could refocus on the job at hand, that of focusing its attentions on the city's economy.
Robin Austin, the MLA for the region has even weighed into the debate suggesting that Kitimat's feuding factions end their bickering.
That probably would be the best outcome for those residents suffering the effects of the economic impact of recent events.
.
Many however probably don't have time to take note of the dysfunction of their elected officials, no doubt they have more pressing problems of their own, busy as they are packing up their homes for their move out of the community.
Posted by . at 8:20 am