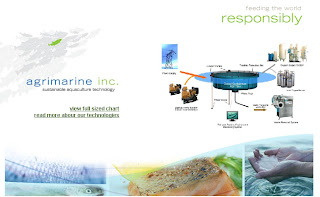 The Lax Kw'alaams First Nation and a company known as AgriMarine have signed a memorandum of understanding which as the press release says will "investigate the possibility of developing closed containment cultured salmon operations utilizing AgriMarine technology in Band territory on the North Coast of British Columbia."

AgriMarine touts its technology as something different than the current and controversial open net farming technology, suggesting that it offers a solution to the issues facing this industry and mitigates the environmental impacts associated with conventional net cage fish farming practices.
Under the terms of their memorandum, AgriMarine and Lax Kw'alaams will begin to seek out potential sites within the Band's territory while Lax Kw'alaams will take the lead in the process of environmental assessment and addressing the required licencing permits and other matters of the bureaucratic nature.
At the moment there is a moratorium on the development of new fish farm licenses, a situation that is expected to be re-addressed when the Department of Fisheries and Oceans takes charge of the process later this year.
Lax Kw'alaams by introducing the AgriMarine system into its waters is hoping to revive it's fisheries based economy.
There is still however is no unanimity in the acceptance of fish farms on the north coast, an issue that has been controversial in the past and one that we suspect will remain controversial for other stakeholders on the North coast, despite the decision of Lax Kw'alaams to move forward with their plans.
Posted by . at 7:14 am