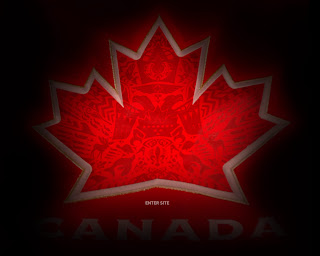 It's his home rink, so Roberto Luongo will lead his nation onto the ice and take to the nets for Canada's first game of the 21st Olympiad men's hockey tournament, a much anticipated debut for Team Canada in the the pressure cooker Olympic experience.

With Team Canada settling in for their one and only practice prior to the tournaments start, all eyes were on the practice goaltenders with an occasional glance towards Ryan Getzlaf, or in particular Ryan Getzlaf's foot.

The Olympians began to arrive in Vancouver on Sunday evening, just in time to hear word of Canada's first gold medal as a host nation in the Olympic movement, a handy bit of news that knocks off one more item from the pressure list that these international gatherings seem to provide for Canadian athletes.

So with that particular monkey off their back, they could settle in for an instructional session from coach Mike Babcock and get familiar with the various line combinations that he and his coaches have thought up for the Olympic tournament.

Canada Hockey House, the re named home for the hockey tournament will be jammed to the rafters as Canada takes to the ice on Tuesday with a 4:30 start (Pacific, 7:30 in eastern Canada) with the home side's fans ready to welcome their Olympians to the host venue.

Luongo's start comes after a less than successful outing in Minnesota, where he and his fellow Canuck's gave every indication of having other matters on their minds as they dropped a contest to the Wild.

Putting him into the nets on Tuesday is a wise decision by the coach, for one it allows the emotional release that the fans will provide for their team to have even more intensity with the hometown goaltender in the nets, putting that anticipated wall of noise to maximum volume before the team has to get down to the very serious business of navigating the tournament schedule.

In a pure hockey decision, it also allows Luongo to get his game back on track after Sunday's distraction, allowing him to get the feel of the tournament as the Canadians face one of the less intense of teams in the early days of the competition.

It's anticipated that Martin Brodeur will get the Thursday start against the Swiss team, another measuring stick for the Canadians as they work to get off to a quick start and develop the on ice chemistry that will be required by the time the medal round eliminations come along.

While Canadians learn and revisit some of the less known aspects of the Olympics in the winter time, the main focus for many will be the success of Team Canada in this hockey tournament, much has been made of the pressure to perform and the rather unusual boasting of our quest to own the podium, but for many Canadians the hockey tournament is the Holy Grail of Gold medals.

The competition will be strong, the Russians, the Swedes, maybe the Finns potential obstacles to the playing of O Canada by tournaments end, and never far from their minds the Americans, a team that has been keeping the lowest of profiles in the run up to the Olympics.

With Brian Burke providing a masterful job of reducing the pressure on his young squad allowing them to settle into the event and bide their time. Much of Canada's competition in the medals so far in this Olympiad has been a battle between Canadian and American competitors, Burke's hockey team no doubt will like to continue on with that ongoing trend.

Those two squads will meet on Sunday in the final game of the opening round of the tournament, a game which could provide no shortage of drama and interest and will offer a good measuring stick for how both teams are progressing heading forward.

Though both would be wise to take care of business on Tuesday and Thursday first, lest Sunday become a key battle early on in their Olympic experience.

.
Item was first posted to the HockeyNation blog
Posted by . at 1:32 am

I really like this blog, It's always nice when you can not only be informed, but also get knowledge, from these type of blog, nice entry. Thanks