With RCMP contract up for renewal, is it time for a Provincial Police Force 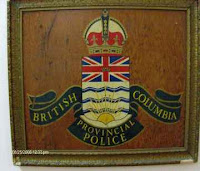 The RCMP's contract for policing in British Columbia is up for a renewal this fall, a process that has provided for a negotiating session which could see the federal police force tasked with policing duties  in the province for at least the next twenty years.

But before the provincial government signs on the dotted line, some British Columbians are urging that they give serious consideration to handing the Mounties their walking papers and returning to the days of a provincial police force.
The last month has seen a number of articles in the Globe and Mail and Vancouver papers which outline this push for a provincial police force, which for some British Columbians would be more accountable to the provincial government and the province's residents.
The call for a provincial force comes in the wake of a string of high profile controversies, issues of concern that have left the federal police force in a less than favourable light among some residents of the province.
From the taser death of Robert Dziekanski at Vancouver International Airport, perceived fumbling of the Air India investigations, to the call for an inquiry into the handling of the investigation into  the gruesome Pickton serial murders, the RCMP has been on the receiving end of much scrutiny these last few years.
For Northern British Columbia residents the lack of progress into the investigation into the past disappearances and murders along the Highway 16 corridor, known as the Highway of Tears,  as well as the in-custody death of Ian Bush in Houston of a few years ago have long been items of concern as well.
Beyond those major concerns, there are any number of more localized issues in communities across the province that have provided for much of the talking points when it comes to how we should be policed in British Columbia.


Some communities in the province, mostly in the Greater Vancouver area, have chosen to set up their own police forces, a process that has spurred on the debate for a more regional force in that region.

However outside of the major urban areas, the RCMP hold down the fort when it comes to policing, an arrangement that many communities are comfortable with though with concerns over staffing and interaction between the force and the communities they serve. They would no doubt wish to be included in any debate over the concept of a provincial force over the current federal one.
Former Solicitor General Kash Heed, a former police chief himself at one time appeared to be the point man when it came to the move towards provincial policing, during his time as Solicitor General he received a number of letters and other correspondences seeking a change from the federal force to a provincial one.


His interest in addressing the issue stirred up some ghosts of the past and some interesting thoughts on just what brought the era of the British Columbia Provincial Police to an end in 1950.
However, with his own  troubles earlier this year regarding an investigation into alleged election act infractions, Heed stepped down as Solicitor General, leaving the main advocate of a provincial force on the sidelines in the debate.


His replacement Mike de Jong it would appear doesn't have quite the same interest in re-visiting the days of the BCPP and instead is seemingly inclined to negotiate another twenty year term with the RCMP.


It would seem that his goal is to  not have the process sidetracked by a lengthy review over policing and instead to bring the discussions to a quick resolution, keeping the RCMP as the province's police force for the next two decades.


If there is to be a debate over the future of policing in the province it would seem that time is fast running out to begin the process, once the next contract is signed and the twenty year term has commenced, the discussion it would seem would once again be left to the history books.


Over the last year or so, our Podunkian archives relayed some of the debate over policing in the province.


March 2009-- Rumblings of the need for a Provincial Police force in British Columbia
November 2007-- Reconsidering the Red Serge?
November 2007-- Is it time for the Mounties to ride off into the sunset?