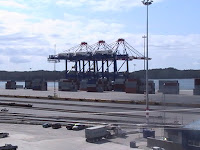 "We are pleased to have built upon the strong collaborative environment at the Prince Rupert Gateway. This agreement forges a strong partnership to further improve the performance of the West Coast's most efficient gateway for transpacific trade and sets the stage for greater transparency for shippers in their supply chain management." -- Don Krusel of the Port of Prince Rupert outlining some of the key elements of a new service agreement between major participants at the Port of Prince Rupert.

The goal as detailed in a press release issued today is simple: "promote and better measure improvements in port performance and to enhance Prince Rupert's role as a preferred gateway on the west coast for Central Canada and U.S. Midwest markets."

To that end, the Prince Rupert Port Authority, CN Rail and Maher Terminals have signed a level of service agreement that will set specific targets for continuous improvements in the handling of cargo through the Fairview Terminal.

John Buckley, president and chief executive officer of Maher Terminals explained that the agreement builds upon the already strong ties between the three players in Prince Rupert as they continue to grow the throughput through Fairview with an eye towards the future.

One of the key factors in the agreement is the ability to improve the delivery targets with specific times for unloading and loading containers between vessels and rail cars, dwell times at the terminal, and CN transit times to markets in Canada and the U.S.

A process that should help to reinforce the reliable source of transit for those customers that are currently using the Northern Gateway, while at the same time showcasing the terminal's potential for those that could soon come on board.

You can review the details on the agreement from this release issued today.
Posted by . at 1:22 pm

eToro is the ultimate forex broker for beginner and full-time traders.