Petitions, potential paydays and predictions on the Northern Gateway 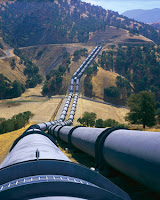 “It's all about opening the gate wider. The more raw bitumen pipelines you have, the larger the tarsands can become,” -- NDP MP Nathan Cullen, outlining for the Toronto Sun one of his reasons for trying to stop the Enbridge Gateway pipeline.


It must be getting close to crunch time for the development of the Northern Gateway pipeline project, such are the indications from a flurry of activity attached to that file over the last 48 hours or so.

Monday, Enbridge the proponents of the pipeline project that would cross British Columbia on its way to a terminal point in Kitimat offered up a ten per cent equity share in the project to the various First Nation bands across the province that would find the pipeline crossing their territories.

An initiative designed we imagine to move the process further along and begin to secure support for the project that is running into a fair amount of controversy in numerous communities across the province.

While Enbridge was offering up what it calls indirect cash and benefits, those opposing the project were busy themselves, with all fifteen opposition MP's in British Columbia combining forces to deliver a letter to Prime Minister Harper seeking to make official, the currently unofficial moratorium on oil tanker traffic along the province's west coast.

The six  Liberal and nine New Democrats representing B. C. riding's are seeking to reinforce for the Prime Minister the dangers that they see in allowing oil tankers to enter the coastal waters off Kitimat, Prince Rupert or Haida Gwaii, at the moment no official legislation exists to ban such activity, but the letter writers are hoping that will change in the near future.

Among the signatures on that letter to the Prime Minister, is that of Nathan Cullen, the NDP MP for Skeena Bulkley Valley, who outlined some of his thoughts on the issue for the Toronto Sun newspaper, expressing his concern that the pipeline project only makes the footprint of the Alberta tar sands much larger.

If successful in their letter writing campaign, it would effectively render the Northern Gateway project as pointless, with no ability to distribute oil products from Alberta though west coast ports, Alberta's producers will be required to find alternative methods of shipment.

The current controversy over the proposed project has some of Canada's oil industry executives wondering if the the project has any future at all.

One executive,  Hal Kvisle, one time CEO at Trans Canada Pipelines is sceptical,  recounting for the Globe and Mail how he has personally travelled the stretch BC from Prince Rupert to Alberta and was not convinced that such an undertaking would ever gain approval from the various groups and assorted regulatory groups.

As we outlined yesterday on the blog, CN has outlined its own proposal for the transportation of oil from Alberta to the pacific, a process that would use the railway network to transport Alberta resources removing the need for a pipeline.

A solution however that doesn't take into account the ongoing quest to stop any prospect of shipments from pacific ports nor any potential backlash over the risk of increasing volumes on the rail lines.

While the Enbridge proposal may be facing numerous challenges, many observers in the resource sector suggest that the Alberta resources will find a way to market somehow, whether through existing facilities in the lower mainland, or the US.

With the thirst for oil still dominant not only in North America but in Asia as well, the pipeline companies believe that they have pretty positive future ahead, whether the Northern Gateway proposal moves forward or not.

What is to be determined once the final presentations and petitions are provided for will be whether the Northern Gateway has a future, or like many other mega projects of the past whether it will be relegated to the shelf to gather dust.
Posted by . at 1:24 pm