Another call for a change of leadership for the NDP 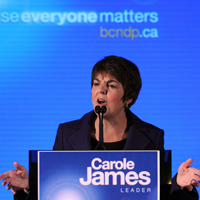 "Under Carole James’ leadership, there has been a steady erosion of our democratic principles. Debate has been stifled, decision-making centralized, and individual MLAs marginalized. "-- Part of a damning statement from NDP MLA Jenny Kwan, calling on the party to accept that it's time for a change and to initiate a leadership contest.

And so it appears to be on, while Carole James may have won the vote two weeks ago that brushed back some of the rebels within the NDP ranks, the coalition to overthrow her seems to be gaining strength and now with a high profile declaration.

Ms. Kwan who seven years ago nominated Carole James for the leadership, has now taken the most public stance yet to insist that her time has passed and that new leadership is required.

Many observers of the political scene in Victoria now await the reaction of the NDP leader to this latest attack on her leadership, in the past such public displays have resulted in expulsion from the caucus circle by Ms James, but that perhaps is a card that she has already over played and may be hesitant to use on Kwan who is one of the more powerful of party members these days.

During the November meeting which provided it's support of Ms. James leadership, Kwan was in the forefront of a group of NDP MLA's (including the North coast's Gary Coons) who clearly showed their displeasure at the vote,  in a visual protest known as the day of the yellow scarves.

In a very public display of opposition, 13 of the NDP's  34 MLA's on November 18th chose not wear the brightly coloured scarves of support for the leader, clearly defining the split in caucus despite the results of that vote that sidelined the quest for a leadership motion that would have had her face a leadership contest in 2011.

As it seems now that possibility may still be in play, though judging by the moves of today, a leadership contest may be moot, if it seems that there is a growing movement against her leadership within her own caucus.

Micheal Smyth outlined back on November 21st how Ms. James political enemies weren't going away, if anything, today they launched yet another offensive on her leadership.

Whether the leader can withstand these challenges much longer is no doubt of concern to the NDP rank and file across the province, who may soon once again have to either come to her side or suggest that hers is a no win situation and it may indeed be time to go.

Labels: calls anew for leadership change for NDP in Victoria