NCL set to sail into the Prince Rupert sunset in 2012 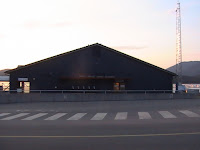 Good night, good night! Parting is such sweet sorrow, That I shall say good night till it be morrow. -- Juliet's most famous declaration from the balcony scene of Romeo and Juliet.

Much like Julie's farewell to Romeo, parting will indeed bring such sweet sorrow for some in the community as Prince Rupert prepares to bid farewell to the last of the big ships in 2012 .

Prince Rupert's Cruise Ship Terminal could be a very lonely place in one year's time, as the last of the Alaska cruise lines that once called on the city brings to an end it's association with the city next year.

Norwegian Cruise Lines provided the words to their own sonnet of sorts, advising that they have found another love for their clients. Chasing the southern temptations of Victoria, which will now provide for shore excursions as cruise patrons prepare to trade in the charms of Cow Bay for Victoria's Inner harbour and beyond.

A decision that will be leaving tourism officials in the city to review their cruise ship strategy and seek out some potential new clients for the city's tourism dependant businesses.

The decision to shift ports was made after fielding a number of requests from passengers who had voiced their concerns over the Rupert stop, a good sample of which can be found from a cruise travellers website.

As we outlined on the blog earlier this year, if they were looking for some feedback on how Prince Rupert was faring on the Alaska cruise circuit, the Cruise critic website provided its own focus group for local tourism officials.

As the reviews rolled in the warnings of trouble became clear, passengers would frequently offer their concerns over the offerings of local tourism, more than a few issuing the warning that there were few things to do during the Prince Rupert port call.

Some suggesting leaving the ship as to be a waste of their time. A death knell for a port seeking to find its way in the competitive cruise industry.

More than a few requests were made for Norwegian Cruise Lines to replace the visit with a location with more to offer, the most popular choice being Victoria, a request which NCL seems to have heard quite clearly.

The cruise line departure marks the second time that the Port of Prince Rupert has been left in the setting sun, the cruise industry first appeared off our shores in the mid eighties only to leave shortly after, with many of today's comments sounding rather familiar.

At that time however, there were infrastructure problems in place that were thought to be the main cause of their abandonment of the region, with no cruise dock in place cruise lines seemingly tired of having to haul their passengers into to town to the lightering dock.

With that message ringing in their ears local proponents of the cruise industry pushed for a permanent cruise facility to help sell Prince Rupert as a cruise destination and with that the Prince Rupert Cruise Terminal was born.  Followed closely by the development of the Atlin Terminal and Cow Bay area, both of which benefited the most from the second arrival of the ships a few years ago.

While those developments evolved, great plans for future development in the area came into our imaginations, though for the moment all that came of those dreams was a costly, paved parking lot across from the Atlin Terminal.

That first year of the rebirth of the industry provided for quite the scene, there were First Nations Dancers in Mariners Park, a festival scene found vendors and local residents gathered in the park making for a lively scene for almost every cruise ship arrival.

It at times had the choreography of a Broadway play, with Rupertites playing the role of extras it seemed in some grand production. As the years moved on however, our interest in the production seemed to diminish, the arrivals of the ships eliciting more of a minor frustration that the wait at the check outs at Safeway was going to be particularly long on Thursdays.

Beyond the scene surrounding the Cruise Ship Terminal itself there were many diversions for cruise ship passengers to enjoy, the first year featured the excursion train that travelled past the North Pacific Cannery museum and on towards Terrace turning around at the petroglyphs near the Tyee lookout. That service came to an end after year one, never to return.

Likewise, the bus tours of the city seemed to fizzle out after a few of the cruise lines that had arrived for our second act in cruising pulled out. The declining numbers of those available to take the tours not worth the trouble of sending the buses and their guides out around the community.

By the time this years cruise schedule had started the best we had to offer for a tour of the city was the shopper's bus that would take cruise passengers into the downtown area, where more than a few would be dropped off into an area of the city looking rather worse for wear, with boarded windows and/or empty store fronts to greet them.

There was the downtown market which blocked off a portion of Third Avenue near city hall in its first year of operation, but it was a project that never seemed to gain much traction, this year it too looked a little worse for wear and smaller as participants set up their tables and tents on the lawn of the court house.

While the cruise lines themselves can probably share in some of the responsibility for our lack of success at this go round (some of the scheduling wasn't particularly helpful with but a whistle stop of a few hours by some lines more for bureaucratic, rather than tourism reasons), there is still the need for some explanations from the local officials.

The Northern View offered up some of their thoughts on the latest news, but the sudden realization  that we as a community need to get busy next year to attract other cruise lines seems a bit like damage control.

Shouldn't the community have been working that strategy from the first warning a few years back, when the first of the cruise lines took us off the destination map?

The latest thoughts seem more like a case of closing the barn door after most of the horses have gotten away.

In the short few years since we returned to the world of cruise ship tourism our message seems to have become rather mixed, with no particular strategy in place it seemed as though we had the feeling that just by opening the terminal all would be good.

Clearly as things have turned out, that wasn't the case, but we aren't alone in that particular place these days.

Campbell River has put a number of its own  cruise related tourism plans under review, suffering more than a few setbacks in its quest to become part of the cruise industry.

A 19 million dollar development project in that community a testimony to the fickle nature of an industry that can at times come and go with the tides, leaving coastal communities to compete with each other for a share of tourism revenues.

Officials there have  begun a review of their efforts, as not one cruise line has pulled into port since 2008. The Campbell River  Indian Band recently laid off employees and ceased operations a few months ago and is re-evaluating its plans for the future, a bit disappointed that they haven't found the success that they anticipated..

Despite the setbacks in Campbell River, Nanaimo is about to open its own cruise infrastructure for this upcoming season,  part of their quest to attract the vessels and their passengers and an addition to the scene that will get make things that much harder for both Campbell River and now us.

In an industry as competitive as the cruise ship tourism industry, the communities that find the most success are the ones that offer the most unique experiences and entertainment for their visitors.

Norwegian Cruise Lines is just the latest to determine that Prince Rupert isn't at that point yet and while they offered up hope of a return sometime in the future as the "market matures", it sounded much more like a fond farewell.

Leaving us spurned, feeling a little abandoned and wondering what to do next

Good points made on the need pull together a comprehensive strategy among multiple groups if we are to succeed in growing the cruise tourism sector. A couple of points of clarification - while NCL has elected to move their regular weekly call to Victoria for 2012, they remain open to coming back to Prince Rupert if improvements are made. In addition, the industry is not dead, as other cruise lines will be calling on Prince Rupert at the Northland cruise ship terminal in 2012. As well, your comments on no tours is also misleading. In fact, Prince Rupert's strength is its diversity and quality of excursions and experiences with 500 - 1000 guests on organized tours every time a ship calls. The challenge has been meeting the expectations of those guests not on tours with an eroding retail bases and limited visitor capacities. This issue has only become more challenging as ships have gotten larger growing from the 2,000 passengers ships handled in 2004, to nearly 3,000 passengers over the past few season.

While I'm sure that we will see other vessels in port, I don't see any announcements of the scope of Canrival, NCL et al, which was the supposed genesis of the
cruise terminal.

And by perusal of the cruise critic commentaries, it would seem that locally proponents of the cruise tourism sector haven't made the necessary adjustments to the offerings for those the disembark.

As for NCL while they suggest they are welcome to the idea of a return here sometime int he future, that sounds a little like corporate spin, if they were truly inclined to make the market work wouldn't they continue to call here and offer up their suggestions to local participants as to how best serve their customer base?

Nanaimo's terminal comes on line this year and as mentioned in my piece Campbell River is still trying to increase the presence of its terminal on the cruise industry, I would imagine NCL and the others may also be investigating those locations to see what they have to offer, weighted against their recent port of call experience here.

Don't get me wrong I would like to see the local cruise industry participants find success, but we certainly seem to have suffered a form of attention disorder on that sector in the last few years.

Going into some sense of denial on the reasons as to why they chose not to return isn't going to address the larger issue.