VIA Rail prepares to put the Totem Train on the rails 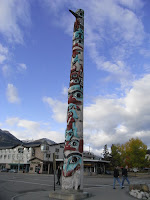 Via Rail is making it's final preparations for a special journey in mid June as the Haida Nation repatriates its Raven Totem Pole to Haida Gwaii.

The pole has been part of Jasper's visual scenery since 1915 when it was placed by the Grand Trunk Railroad at the Jasper rail station to greet passengers crossing the nation bringing with it a fascinating history.

The pole's past dates back to the 1870's when a Haida master carver in Old Masset, Haida Gwaii carved the 12-metre (40 feet) totem, it's eventual journey taking it to Jasper where it had been holding its place until April of 2009 when it was removed for safety reasons, prior to its removal it is estimated that it has been photographed by hundreds of thousands of visitors from the around the world.

As part of the repatriation ceremonies, Via is offering its customers the opportunity to ride a special train from Edmonton to Prince Rupert, part of an 11-day, tour promises which Via says will be a rich celebration of the history and culture of the Haida nation.

The special tour package includes the opportunity to learn more of the history of the pole and the Haida people as travellers will be joined by members of Jasper's community, Parks Canada and representatives of the Haida Nation as they return the Raven Totem Pole to Old Masset, BC. Beyond the historical lessons of the Totem pole, travellers will also learn more about Canada's National Parks and other items of interest along the tours itinerary.

The tour package includes travel with VIA from Edmonton to Prince Rupert, (meals while travelling in Touring class between Jasper and Prince Rupert), 10-nights accommodation, a ferry journey along the Inside Passage from Prince Rupert to Port Hardy, scheduled transfers between Port Hardy-Victoria and Victoria-Vancouver, in addition to a number of popular local tours in Jasper and Victoria.

The opportunity to take part in a bit of living history comes with a fairly impressive price too, the cost of what is called a once in a lifetime tour will be $2,122.

The trek west begins on June 16th, when travellers step aboard the totem Train, Via has more details on their excursion posted in a press release issued this weekend.
Posted by . at 1:41 am

I'm definitely hoping to cover this journey on my blog! Glad to see its striking a chord...