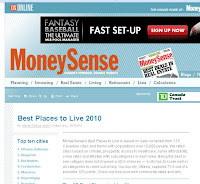 As we all know by now, every year Prince Rupert parents, teachers and school officials express their thoughts on the rankings of the Fraser Institute which regularly records Prince Rupert's educational to be in the lower rankings across the province.

It may be time however for School District 52 to move over, as there's a new list of woe for Prince Rupert as the city finds itself recorded in a less than flattering light by a national publication when it comes to our spot as a place to live in Canada.

The latest blow for the city's ego comes as the City of Prince Rupert finds itself listed very close to the bottom of a number of categories on the Moneysense magazine listings of the Best Places to live in Canada.

The publication, which is part of the Canadian Business family of magazines, examined a number of factors to reach its determination of  ranking Prince Rupert overall as 173rd out of 179 cities surveyed across the nation, not the kind of ranking that will be flooding the Economic Development office or Chamber of Commerce with requests for information we imagine.

This years ranking is a significant drop from last years number when the city was listed at 148, though the dramatic drop is attributed in part to the fact that the listings this year were expanded to 179 from last years 154, though that also means that were a significant number of new additions that fared much better than we did.

The only communities that fared worse in the overall rankings than Prince Rupert were Campbell River , BC, Port Alberni, BC, Quesnel, BC, New Glasgow, Nova Scotia, Williams Lake, BC and Bay Roberts, Newfoundland which finished at 179 overall.

Of communities in the North and Northwest, populations of 10,000 or more, Terrace was rated at 170 while Prince George ranked at 164.

Overall there is no denying the fact that Moneysense doesn't have much positive to report back on about their number crunching when it comes to Rupert.

In two of the categories Prince Rupert finished dead last in the rankings, listed as the worst place to live in the nation when it comes to the weather or looking for a job. In the crime category we fared poorly as well, between  five to two spots from the worst in Canada depending on the crime statistics examined.

Of our two bottom finishes, Moneysense had capsules of both categories for the city, outlining the weather woes as such:

Scientists haven proven that a lack of sunlight can drive you. Add to that Canada's cold winters, dangerous road conditions and being cooped up from November to March and you get an undesirable place to live. Canada's worst city for weather: Prince Rupert, B.C.

As for unemployment their interpretation of the data for Prince Rupert suggested:

The past two years have been tough on many sectors in Canada. The ability of cities to attract and keep a broad spectrum of industries is its greatest strength. A city can see its entire population impacted negatively when it relies on one or two core industries. Canada's worst city for employment: Prince Rupert, B.C.


The Moneysense rankings were determined by rating each city of the 179 examined in a variety of categories, each which had a number of sub categories. Below are those rankings and where Prince Rupert rated among the 179 in each

For some of those that left in the past the latest findings will be but confirmation of their decision to exit. For some who have held to their roots, the report will be cause to circle the wagons, dismissing the report as not of value to discuss.  And in fact in the past, that seems to be both the official response here and  the unofficial one of those that are true Rupert apostles.

While home town boosterism is admirable, the simple fact is that of those that read the magazine, few if any will actually visit the city and if they were to consider the idea, one imagines their thoughts may be swayed by all that data. Investors likewise may interpret the data presented as a warning about potential investment here, something that should be of concern to the city as perception tends to shade these issues more often than not.

For those that remain here and try to make their way with their lives on the north coast, it perhaps highlights some of the things that are wanting at times, some of these findings may be of value to the argument that there perhaps are better ways to do things here.

Perhaps the report could serve as a warning signal to the city and the province for that matter that there are some serious issues to take care of in the Northwest to make ours a more desirable location. While we obviously have no control over the weather, other concerns as crime, unemployment, economic development, lifestyle amenities and such are within the grasp of the city and province to change directions on.

Regardless as to how they and we as Podunkians may personally feel about the Moneysense survey and findings, the City and its council will have to accept that  this data is out there now and find a way to improve our image and our fortunes before the next issue comes out in a years time, otherwise we potentially fall even further off the national radar.

The full report can be found on the web at the Moneysense website here, the overall rankings list here. There is an explanation of the rankings and interviews regarding the survey as well as a podcast outlining the project which you can listen to here. They also have a Facebook page, where we imagine the debate over the rankings will eventually rage across the nation.
Posted by . at 1:14 am