HST opponents closing in on their petition goals 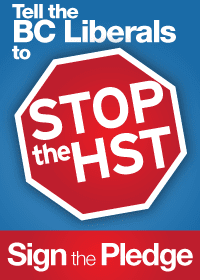 The Liberal Government's master plan of Harmonizing the Sales Taxes is finding that the resistance is growing by the day, this as petition organizer rack up the number of riding's meeting the  criteria of 10 percent registered voters per riding onboard.

By Monday night, the stop the HST forces had found success in 72 of the provinces riding's, leaving them with only 13 more to convince before they can move on to the next stage of their battle. Organizers have until July 5th to scoop up the final thirteen and provide Premier Campbell and his finance minister with a giant political ulcer.

Even now it appears that the unexpected success of the Anti HST forces is making things rather uncomfortable for the Liberals, who clearly have bungled their introduction of the idea and misjudged the level of anger against their plan.

Such are their troubles at the moment, that even with the very public transgressions of the past from former Premier in Bill Vander Zalm, he is finding a fair amount of success as one of the lead players in the anti tax forces. And while the former Social Credit Premier won't be coming to Prince Rupert after all, the populist revolt he is involved with is seemingly catching hold in the province.

Something that perhaps could have been avoided had the Liberals been a little less ham fisted with their plans and provided a more balanced and transparent approach to the tax, outlining the necessity of and benefits to be presented, that they believe will accrue from the harmonized approach.

Instead, they now face a rather angry backlash, which while not yet indicative of a massive revolt of the populace, is warning enough that they have not done a very good job of selling the merits of their plans.

Bill Tieleman writes in the Tyee that the backlash has so caught the Liberals by surprise that they have morphed into a version of the one time Nixon White House heading into its final days, a suspicious and paranoid group that seemingly have lost their political compass and as Tieleman puts it have been showing a fair amount of disdain for the public.

The article provides some background into the current state of the petition drive, the governments response thus far and how the battle over the HST is starting to colour the rest of their political agenda.

We may very well have the HST as a fait accompli in the end, but for the Liberals the path towards it is not going to be a smooth one and certainly is providing many lessons for the seemingly tone deaf government of the day, from how not to handle a policy issue, to the ages old reminder that you ignore the voters concerns at your own peril.