Surprise! Premier Campbell's not so slow fade into history 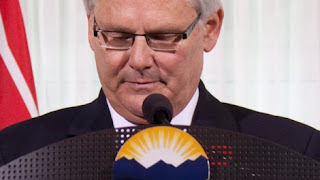 “After considerable soul searching and discussion with my family I have decided to ask the BC Liberal Party executive to hold a leadership convention at the earliest possible date to select a new leader for our party."-- Premier Gordon Campbell's opening words announcing his decision to resign from the Premier's office and call for a Liberal leadership convention.

The Premier made his short announcement (read the full text here) at a hastily arranged press conference in Vancouver at 11 :30 this morning, by 11:35 British Columbians were wondering where things go from here as the thrice elected and 34th Premier of the province outlined that he was asking the Liberals to conduct a leadership convention to replace him.

During the course of his political epitaph, the Premier touched on the sacrifices that family make for public life and explained that his recent initiatives had been overshadowed by the focus on his leadership, stating that it was time for a new person to lead the province.

Still to be cleared up for all of us is when exactly the Premier will step down, who if any interim leader may be and who may feel that they best offer what Liberals may be looking for in a leader, offering up for British Columbians which candidate may best resonate with an electorate that has grown disillusioned with not only the leadership of the party but the direction of his government.

While the timing of his announcement caught many off guard, the actual resignation announcement perhaps was not such a surprise development.  With his declining approval numbers and a revolt seemingly brewing within his caucus, it would seem that it was only a matter of time before today's eventual result had come to the boiling point.

His decision to end his time as Premier perhaps was spurred on by reports of a backlash from caucus members at their planned caucus meeting set for tomorrow.

As well something that may have been on his mind was the fact that Liberal members across the province have been voting by secret ballot this month on their confidence in the Premier's leadership.  The results of that ballot were to be released at their Penticton convention this month from November 19th to 20th, a poll that now won't need to be released.


Tielman's offering on the Tyee yesterday complete with its comparisons to the days of Margaret Thatcher, seems prescient in its content as the news of today delivered.

The only intriguing aspect of this decision however is the confusion it seems to have left the Liberals in today,  the Premier took no questions after his announcement, apparently deferring that chore until tomorrow. No current members of cabinet or the party for that matter have weighed in with any kind of timetable or opinion for that matter on what today's announcement portends, preferring to go with the party line that today belongs to the Premier.

The idea of Mr. Campbell staying on for a number of months as a caretaker Premier  which seems to be the course of action being floated around Victoria today, will provide for some interesting political theatre, one which will not be an enjoyable experience for him personally,  while politically it will only accentuate the lame duck nature of his leadership now and make the party a target as indecisive.

The normal course of action would be for an interim leader (one without leadership ambitions) to take over immediately, while the party goes through the process of a leadership convention and seeks to find that acceptable voice that will perhaps recapture some of their lost political ground of the last six months.

That course perhaps may yet be the path the Liberals follow, once they think through the ramifications of an unpopular and soon to be departing Premier hanging around as a reminder of all that discontent with the Liberal message.

The political commentators have been busy through the day since the press conference was first announced, the pace of those comments and observations increasing through the afternoon, both the CBC and CKNW out of Vancouver featured comprehensive coverage of the announcement through the lunch hour,.

CKNW in particular dedicated the remainder of it's afternoon programming to the developments that blasted out of Vancouver this morning. You can listen in to some of the coverage from CKNW at their Audio Vault, pick up your coverage at the 11 am hour and follow on with the debate through the hours to follow.

Likewise, print journalists were quick to compose their political obituaries for the Premier's  26 years of political life, some of those efforts can be found below.