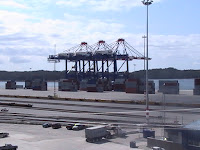 With negotiations on a number of issues at a standstill on matters relating to British Columbia's ports, mediators have called for the two sides to extend their current agreement for a period of two years, giving both sides to try and find some common ground.

While that contract extension would be in effect, the mediators would like to see an Industrial Inquiry commission be put  in place to try and make some forward progress on the contract proposals in dispute as well as other key issues on the waterfront including the longstanding concerns over discrimination against female workers.

The mediators completed their report in July and offered up their recommendation that the current contract be extended to 2012 but with some changes to the wages in place at the moment.

As for the suggestion of an Industrial Inquiry Commission it seems to be a non starter for the employers the BCMEA which found much to be concerned about on that topic, particularly the non binding aspect of any recommendations that might be provided. They would prefer that the process now move towards binding arbitration.

On the other side of the bargaining table the ILWU offered up support for the concept of the Inquiry and feels that it is an idea worthy of consideration.

There are concerns that the constant possibility of labour disruption and the glacial pace of negotiations could drive traffic to other ports in the United States, a prospect that would have an impact on the success of Canada's west coast ports over the last number of years.

The Globe and Mail has a thorough examination of the current situation which outlines some of the background on the state of negotiations and the impact those discussions have on the image of Canada's West coast port industry.
Posted by . at 8:25 am