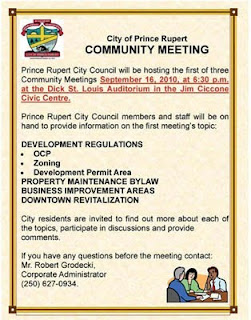 The format seems to be along the lines of a high school Parent/Teacher interview, an interesting approach to information delivery what with city councillors holding court at tables ready to discuss the issues on the agenda of the day.

And while some may question the effectiveness of the project, at least the city's elected officials are making themselves available to those that wish to drop by for a chat, a gesture that could help deflect some of the talk of an aloof council that isn't hearing the messages from the public.

The much discussed schedule of community information sessions got underway on Thursday evening at the Jim Ciccone Civic Centre.  The first night featuring a two and a half hour meet and greet which provided local residents with the opportunity to learn more about the agenda items of the night.

The topics for discussion at this first session included such topics as Zoning Bylaws and Development Permits ; Parking issues; the Property Tax Revitalization Bylaw; the Property Maintenance Bylaw; and the developments involving the Business Improvement Area.

Not exactly the stuff of a barn burner of a public meeting, but who knows what item may spur on a larger debate.

Councillor Anna Ashley provided a backgrounder on the session earlier this week posted to the local online forum hackingthemainframe, a guide which should prove helpful to local residents who couldn't attend Thursday's meeting but may be able to clear some time for the meetings to follow.

In the course of  her dialogue on the site, she follows up her original post with further information about these sessions and other options in making views known to our city officials.

While the sessions will no doubt help bring councillors and residents a bit closer to the issues of the day, allowing council to learn more about what their electors are thinking at the moment, there still may be some gaps in the level of information delivered between the open sessions and the controversial issues of the day.

Those topics that seem to dominate the frequent closed sessions of council through the last year may still remain murky for the foreseeable future.

Items such as the latest developments on the pulp mill lands, internal financial issues or personnel decisions, which seem to frequently be examined in those closed sessions most likely won't have much light shed on them during these public sessions.

The end result being that  residents and taxpayers will  still be looking for information that at times seems to be held rather close to the corporate vest.

Still, it's a step in the right direction to meet with the public, a good way to gauge how they feel about the performance of this council and what they expect from them.

We guess with this format in effect it's like report card review day, with the voters doing the mid term grading.

The councillors and Mayor are going to be on the receiving end of much to think about over the course of these sessions, though in the end it is what they do with that feedback that will tell the tale of how effective these meetings will have been.

The full schedule of these sessions can be found from this press release from the city.