You bring the pitchfork, I’ll grab the torch and we’ll all meet on the City Hall porch! 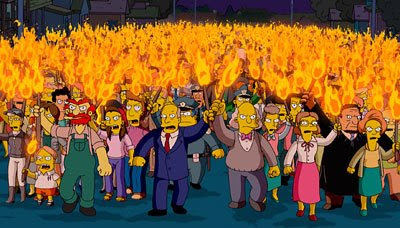 Monday’s city council meeting should be an illuminating event for Mayor Pond and his council; it appears that a segment of the peasantry is in revolt and planning on making a stand at the upcoming council meeting.

The hot topic of the civic hiring process regarding Tanalee Hesse, as administered to by Mayor Pond, has boiled over on the back burner and suddenly flared to life again.

A quasi secret gathering this past week (not quite open to the general public, yet clearly not all that secret as so many folks seem to have known about it) at a local establishment, is reported to have featured an invited group of concerned citizens who expressed their frustrations and concerns to an invited group of councillors.

The secretive nature of the meeting seems to run contrary to the growing demand for openness and transparency in these public matters, and would kind of appear to be much the same kind of thing as what folks have been railing about in recent weeks.

Then again perhaps they were fearful that such an emotional topic might provide for an overflow crowd and felt the need to keep the numbers manageable until further plans could be mobilized. Maybe it was the planning phase for a more inclusive public gathering, a town hall type of meeting where all the concerns floating around town can get a good and thorough hearing.

Regardless of their intentions this week, it would seem that the Star Chamber like conclave only steeled their resolve to carry forward. Judging by some of the blow back from that meeting, as channeled through the hackingthemainframe portal, it would seem that the concerned citizens did not find many satisfactory answers to their questions from some of the invited guests.

What did seem to come out of that gathering however, is a move to take the debate to the Mayors home turf of the council chambers on Monday night. An event that will surely make for one of the Mayor’s more interesting nights while employed as a our elected servant of the people of the City of Prince Rupert .

For the concerned citizens though there may be the need to give some thought to the tone of their approach. One of the participants online in the notification phase for Monday night’s show of people power, seems to have personalized the issue a tad more than perhaps the more cautious of the concerned citizens might like.

By focusing in on the “Issue with our City Manager and His wife” as the invite goes, the debate gets transferred from one of legitimate questions over a questionable hiring policy of the mayor’s and turns towards a more personal nature about the participants involved.

That’s a deviation that won’t be helpful in opening any dialogue as to how the hiring process was wrong. Instead it could solidify the impression of some that a bit of a witch hunt is underway.

That would be quite unfortunate as there clearly are some questions that need to be asked about all of what has been going on in the upper management offices of City Hall.

Regardless though, one suspects that it should be a fairly interesting night on council, and should make for some interesting headlines for the visitors from Alaska to the Southeast conference to take in when they take a look at the Tuesday paper.

For those who long ago migrated to the satellite dish, this could be the one night where you may want to invite yourself over to someone who has CityWest cable and is inclined to watch channel 10.

Or better yet, just head on down to City Hall yourself, the gavel drops at 7 pm, but get their early, it would seem that the good seats won’t last for long!
Posted by . at 2:10 pm