Political standoff at city hall ends for now, with a call for a third party report 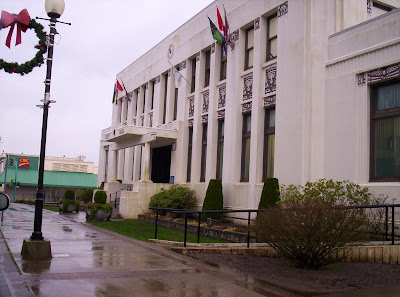 After the build up and expectations of a teeming mass of protesting humanity, ready to hold the feet of our elected officials to the fire, it all appears to have provided for a rather civil ending in the end.

The group of concerned citizens, who formulated their plans last week at a meeting at Breakers Pub, took their cause to the chambers of council on Monday night. They provided for the extras of a standing room only crowd, ready to offer up dissenting opinions on the perceived legalities of a personnel decision made by the Mayor, that provided for 109,000 dollars in contracts to the wife of the City Manager.

Tanalee Hesse worked on a contract basis for the city for about eighteen months, and as has been well documented both here on the Podunk blog and on the htmf portal, has become a bit of a lightning rod for a portion of the community.

Her hiring proved to be the focus of the fifty minute presentation made by three members of the concerned citizens group, who outlined the concerns that they had and how they believe the Mayor deviated from the normal course of action when it comes to making hiring decisions.

The movement to have the Mayor explain his actions in regards to the hiring of Ms. Hesse seems to have blossomed over the last few weeks to include many past issues such as rising taxes, the purchase of Monarch Cable by CityWest and other concerns about the state of business at City hall.

While those issues will no doubt percolate through September and on towards the November Municipal election, the main thrust of the concerned citizens group at the moment however was the call for council to censure Mayor Pond as far as his handling of Ms. Hesse's contracts.

Council from there offered up a resolution, amended once by Councillor Briglio, calling for a third-party auditor report to council. A motion that was passed unanimously, though no date seems to have been provided as to when that report should be presented, so the saga may continue on for a few more weeks.
For his part, the Mayor offered up an apology to Mr. Howie for the nature of the night's inquiries, reprising a theme he has followed through the controversy both in letters to the editor and from his own personal contributions on the htmf bulletin boards.

All of which will provide for more chatter on the htmf boards and of course provide for an interesting backdrop to the upcoming municipal election of November.

The Daily News featured the tempest as their front page story in Tuesday’s paper.
TV 7 also had a small piece on the controversy posted to their website.
.
Update September 10: The Northern View provided their review of Monday nights proceedings with a post to their website on Wednesday, in among the contents of that article is a capsulization of the concerned citizens points, including the conclusion and recommendatio that council should censure the Mayor and that City Manager Gord Howie be dismissed (something that didn't get mentioned in the Daily News account of events).
.
During the course of the discussion Councillor Sheila Gordon-Payne offered up a comment that seems to fall in line with the Mayor's interpretation of the chain of events that led to the hiring, a city in crisis, requiring help desperately and thus approaching Ms. Hesse to take on the job on a contract basis.
.
This of course now raises the question as to whether the entire council then endorses the prospect of hiring outside of normal procedures at city hall. Perhaps we need to have a roll call of councillors to see where they stand on the issue and whether they all share the Mayor's burden in this controversy.
.
It all seems to makes for more discussion points, and we are sure that the conversation on the process will continue around town, both on line on htmf and around the towns various coffee shops and beverage establishments.
.
We reprint that article below, following the Daily News offering from Tuesday's paper.

STANDING-ROOM-ONLY AS CONTRACT COMES UNDER FIRE
Council Chambers full as group questions way in which worker's contract was handled
By George T. Baker
The Daily News
Tuesday, September 09, 2008
Pages one and three

The regular council meeting at city hall Monday was anything but regular.
A standing-room-only crowd packed into the council chambers to challenge the city's former contracts with a contract employee.
A delegation of three local residents, Anna Ashley, Wilf Rimmer and Gina Garon, spoke for more than 50 minutes about their dismay at the city's more than $109,000 in contracts allegedly signed directly by Mayor Herb Pond for work done by Tanalee Hesse.
"It is the issue of it (the contract and tender for contract) not being done in a proper process that I really take issue with," said Ashley. "While the mayor, taking full blame for this is respectable, it is actually false."
Not long after council began, a motion was put forward by councillor Ken Cote - and seconded by councillor Tony Briglio - to allow for an unscheduled presentation to be heard during the council meeting, following up on Briglio's promise last Thursday to do so.
City rules normally requires such presentations to be announced the Monday before council meets, however due to the seriousness of the situation, council passed the motion unanimously.
"Under normal circumstances I wouldn't entertain such a public criticism of any staff member. It's not very fair quite frankly," said Pond. "But given the circumstance and given that it is happening in the media and community in a way I thought the criticism was pretty appropriate."
Hesse, who is married to city manager Gord Howie, was hired on temporary contracts on July 10, 2006, and worked for the city for 18 months.
Ashley claimed that the mayor could not take blame for the disputed contracts because it is the job of the city manager to inform both the mayor and city council about the legality surrounding such situations.
She said: "Our city manager, Mr Howie, has been working in municipal politics for 30 years and ought to have known that the mayor did not have legal authority under the (community) charter to sign the contract without a resolution of council."
"Mr. Howie failed to inform council that a resolution was required," claimed Ashey.
"Mr. Howie should have informed council that the contracts were not tendered."
Citing section 122 of the community charter, that a council may only execute a resolution by bylaw and, after a proceeding of council, is not valid or authorised unless adopted by council at a meeting.
Ashley claimed the mayor had no authority to unilaterally hire someone and sign such contracts.
She added that the city's purchasing policy outlines that all purchases greater than $25,000 must be reported out a regular meeting of council.
Ashley told council she could find no proof of such a resolution.
"The citizens of Prince Rupert are tired with the going ons, the rapidly increasing taxes and the appearance of impropriety - as such we are requesting that council censure the mayor in respect to his handling of Hesse's contracts," said Rimmer.
In response to the presentation, councillor Joy Thorkelsen put forward a motion to have staff deliver a report on why a freedom of information request regarding Hesse's work and contracts appeared to have taken a long time to be provided.
Councillor Tony Briglio amended Thorkelson's motion, calling to have a third-party auditor report to council.
Briglio said such third-party reporting would be free of any perceived influence from city council or staff.
The motion passed unanimously.
Mayor Herb Pond finished the meeting by apologising to Howie for the scrutiny Howie had endured throughout the evening.
.
.
City to seek third-party audit of contract
By Brooke Ward - The Northern View
Published: September 10, 2008 12:00 PM
Updated: September 10, 2008 12:33 PM
A swell of controversy was sedated Monday evening when council passed a motion indicating it will seek an independent third party auditor to prepare a report relating to the alleged illegality of the city's contracts with Tanalee Hesse.
Pitching the motion, Joy Thorkelson expressed a desire for information on the seriousness of the infractions, who is ultimately responsible and what council will be required to do to rectify the situation, to which Pond added that the intent would be to have answers for the entire community "at all speed".
Discussion and decisions on the matter followed a somewhat altered committee of the whole meeting in which councillors Ken Cote and Tony Briglio, respectively, proposed and seconded a motion to overlook normal question period proceedings in order to allow for a presentation by a small delegation of concerned local residents.
During their nearly hour-long presentation Anna Ashley, Wilf Rimmer and Gina Garon put forward a meticulously prepared package that included information and materials brought up through extensive personal investigation and detailed their concerns with the issue at hand, even going so far as to offer conclusions and recommendations to council, including the idea that council should censure the Mayor and that City Manager Gord Howie be dismissed.
"Their actions speak for themselves," said Ashley.
"Both of them appear to think they don't have to follow the rules. The facts show that there was no justification for their improper actions. If we don't call them on it now, what will they do next?"
However, not one of the councillors seemed anxious to take that route, councillors Sheila Gordon-Payne and Tony Briglio once again clarifying that council was in fact aware of the contract and its intention.
"We all know it was our intention to enter into these contacts, not only willingly but happily," said Gordon-Payne, adding that it was council that pursued Hesse, in a time of need.
"Not only was it urgent, but [hiring Hesse] was prudent to keep the City moving," she said.
"It boils down to having dropped the ball and it's an embarrassing situation we find ourselves in," added Briglio.
See the Northern View on September 17 for more on the issue, including a closer look at the concerns and requests of the aforementioned delegation and the resulting action from council.
Posted by . at 1:40 am