OK, she can run in the election, but she had just best keep quiet… 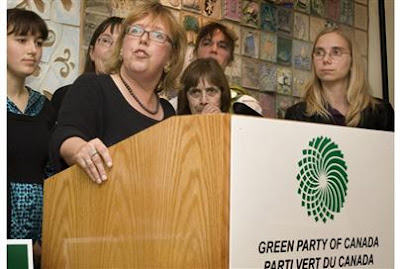 The Boys club of Canadian politics has for the most part decided that the Green Party’s Elizabeth May should not share valuable television time with them in a leaders debate, both in English et en Francais.

The networks working under the ominous name of the “consortium” issued the edict today that the soundstage will be a Green free zone on debate night (we suspect that just to spite the woman they won’t recycle either) as the Men of Canada’s four remaining parties get together to discuss those major points that they think we’re all waiting to hear about.

Of course, in a way it makes perfect sense for a few of the boyos to keep Ms. May off the radar, both the NDP and the Liberals have the most to lose should she outshine them on policy or depth on debate night, sending who knows how many potential votes in search of a candidate with a greener agenda.

We’re not sure where Gilles Duceppe would fall into the roster of aye or nay, though we don’t think that the May Express would be much of a threat to his base in Quebec, but you never know.

Since the “consortium” didn’t announce where the split came down, we’ll never know (until someone tells us anyways) if Stephen Harper was ready to share or shut the door as well. However, if he voted nay he missed perhaps the best opportunity he might get to blindside the NDP and Liberals, had Ms. May been allowed to share her vision on the campaign, we suspect that the bulk of her crossover votes would be attracted from Mr. Layton and Mr. Dion, making her a valuable if non desired ally of the Prime Minister in his quest for a Majority government.

The more folks that leave the Libs and NDP and seek out the Green agenda, the larger any vote spread in the ridings could go towards the Conservatives, or as the old saying goes, the enemy of my enemy is my friend.
For her part, Ms. May isn't just going to sit on the sidelines on her hands, the Green Party is set to pursue legal action against the consortium of broadcasters in Federal Court. A move which will probably cause a few restless nights for the men of Canadian television and politics.
Below some of the fallout from todays freeze out…
Globe and Mail--May's lucky break
Globe and Mail--No May in October
Globe and Mail--Greens out of leaders debate
National Post--Greens head to court over TV exclusion
National Post--In the interests of free and open debate, Greens shut out of leaders' debate
National Post--Greens shut out of leaders' debate
National Post--Elizabeth May has received a blessing in disguise
Toronto Star--Greens shut out of TV debate
CBC-- Greens can't participate in leaders debates, networks rule
Posted by . at 6:36 pm