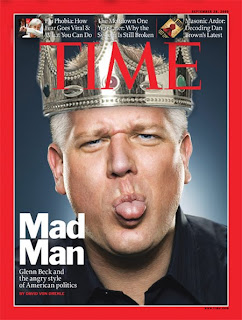 From the whatever help it takes department, comes this hopeful sign for those that are just a little concerned over Glenn Beck's emotional histrionics of late. Many may take heart that the top boss at Fox may soon have cause for a little conversation with his loose cannon host over in the corner office soon.

Beck who has become more than a tad strange of late with his on air theatrics and such spent a good portion of Thursday's show looking at tying 9/11 in to a degree with the recent botched Israeli raids on those ships heading to Gaza.

An American blog site, Raw Story has been taking notes and found one name of interest  in the midst of his meandering path of consequence today, as Beck apparently threw out the name of Saudi Prince Alwaleed Bin Talal Alsaud, well not so much as his name (perhaps a wee bit hard to pronounce we imagine)  as his image with a stern wag of his finger at the visage on the screen.

As things turn out in the most delicious form of irony, the subject of Beck's finger pointing/tongue lashing is also a major investor in News Corporation, second only to King Rupert himself when it comes to writing the cheques and such. And beyond that it seems that the Prince is also rather popular with the kind of folks that might have more than a passing bit of influence with the Murdoch owned network.

Raw Story which clearly is more to the left of the media scene than Beck, must watch his program purely for these opportune moments, and creatively features the fascinating twist in Glen's life that is about unfold with a piece for their website, inculding a clip from the show which brings their thesis together.
.
. .
.
One imagines that over at Fox, management will just be tickled pink (well ok maybe not pink, perhaps a dark rouge) over the idea that "America's Newsroom" is by association of their own host, partially funded by what we imagine he believes is a terrorist enabler.

Sure it's ok for Glenn to rail against the President as some form of danger to America, or even drag the President's children into his strange little on air melodramas, but start knocking on the door of your own shareholders and we imagine there is a large size muzzle about to descend on the set.
Posted by . at 10:42 pm