Make some music in the park part of your Thursday scene 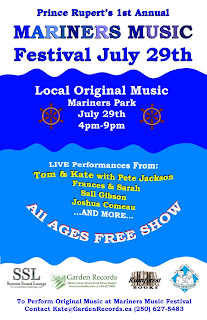 Prince Rupert's new bandstand will get its first official workout on Thursday as Mariner's Park plays host to the Mariners Music Festival, a five hour celebration of local talent.

The show which gets underway at 4 pm will feature live performances from a number of local musicians, such as Tom and Kate with Pete Jackson, Frances and Sarah, Sall Giblson and Joshua Comeau to name a few.

Timed to coincide with the arrival of the weekly cruise ship, it should provide for a festive atmosphere in the park, making use of the new Spirit Square band shell which was recently completed by the city.

The hope is that this debut edition of the Music Festival will prove to be the blue print for more to come, putting Prince Rupert onto the music festival schedule, perhaps with an opportunity to also add out of town performers to shows in future years.

The Prince Rupert Community Arts Council website has details on the Music Festival and other events coming up in the weeks to come in the city.
Posted by . at 11:54 pm