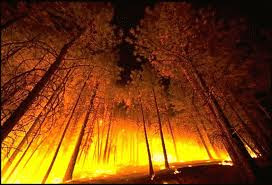 Travellers travelling north or south on Highway 37 to the Yukon border will have a significant amount of travel time added to their itinerary for the near future, as a forest fire has closed the route north.

Signs at Kitwanga advise motorists with a destination north to the Yukon that they will be required to take highway 97 North which will require a six hour drive east to Prince George and then north on to the Yukon to complete their journey.

The fire which is started at some 210 hectares has tripled in size in a short period of time and is burning so ferociously and is so unpredictable at the moment that the Northwest Fires Centre in Smithers pulled its fire fighters off the line as it was deemed to dangerous to be in the area, the Fire Centre will reassess the nature and direction of the blaze and engage the fire again when it is safe to do so.

The fire began due to a lightning strike on Tuesday evening and is the most severe of two fires of note sparked by lightning strikes across the region, the Fire Centre is also keeping an eye on a fire in the Decker Lake area which began after thunderstorms passed through that area.

The dry conditions in the northwest have resulted in a number of fire bans across the region for this BC Day long weekend and perhaps beyond.

Further highway updates can be found at the Drive BC website
Posted by . at 7:30 am