Focused on coal now, but still thinking of the forests 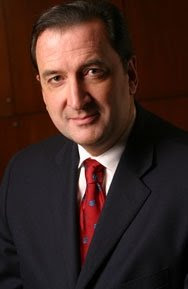 Dan Veniez still has the North coast’s forest industry on his mind, while he currently is running the show at Ridley Island; he still apparently has a fond spot in his heart for the regions once mighty forest industry.

Veniez was leading the eventually unsuccessful charge in 2002 at the time to try and rebuild the Skeena Pulp Mill empire, so with his past experience in matters of forestry has offered up his thoughts once again through the familiar instrument of the printed and published word.

First quoted in a Vancouver Sun article on August 17 and then with his own Letter to the Editor on August 20, that in response to this article from Ric Slaco on the state of our forest industry these days...
.
.

Ric Slaco's op-ed piece Tuesday ("B.C.'s forests can lead fight against climate change") was a terrific reminder of the intrinsic value of B.C.'s forest industry, particularly at a time when market gloom pervades its leadership and policy makers.
When forests aren't rehabilitated to stay healthy, as in the northwest, the economy suffers and so does the environment. For example, most people are unaware that the forests along the Smithers to Prince Rupert corridor are net emitters of CO2.
Changing that requires an ambitious plan to harvest and replant those trees. The fibre can feed pulp mills and go into clean energy, such as pellet and bio-refinery projects. Such a renewal would have a dramatic and positive impact on investment, jobs and first nations.
Slaco's important contribution should be front and centre in a process led by the premier and minister of forests to bring the forest industry into the 21st century.
Daniel D. Veniez
Chairman, Ridley Terminals
Vancouver

The Daily News provided a synopsis of sorts of the Veniez rebuttal, published in the local paper on August 22.

Ridley Terminals keeps eye on forestry
Adapting to change integral for the forestry industry
By Robyn Burns
Special to the Daily News
Friday August 22, 2008
Pages one and three

A port industry leader believes that the forest industry in B. C. is in dire need of a facelift. Daniel Veniez, Ridley Terminals Chairman is standing by this point.

An article published this week in the Vancouver Sun prompted him to respond with a passionate letter-to-the-editor.

He responded to the special editorial written by Ric Slaco, Chair of B. C. Forestry Climate Change Working Groups and VP of Interfor.

Slaco’s article outlined how B. C. wood products make a difference and he called for change in the forest industry.

“This was music to my ears; I’ve been preaching this for years,” Veniez said.

According to Slaco, using forest fibre to its full potential is not only an economic answer for B. C., but it’s a way to lower carbon emissions in the province.

Veniez believes that imagination and thinking outside of the box is what will save the forest industry in this province.

The numerous mill closures throughout the North in recent months may have some industry leaders guessing, what’s next?

A price tag of $5 million bought Veniez and George Petty the assets of Skeena Cellulose Inc. in 2002. By 2003 they had to walk away.

According to Veniez, 60 per cent of the forest in the North West of the province is dead. He believes that with an aggressive harvest and reforestation program the forestry industry can be rejuvenated.

“Our stretch of geography can make a real difference,” he said.

Recent studies have brought concerns over carbon emissions to the forefront.

Many industries are now on the hunt for alternative energy sources.

“there is a high demand for places where alternative energies could be developed and 50 per cent of the fibre basket is (rotten) and it can’t be used for anything else,” Veniez said.

“I see tremendous opportunities to create some real jobs.”

“The government has shown that it can’t manage the forest industry and shouldn’t be asked to.”

The Port of Prince Rupert sits at the backdrop of this potential economic future Veniez sees.

”The port is a huge advantage,” he said.

A lack of imagination in the Legislature is what Veniez contributes to what he calls a self induced decline in the forest industry over the last 15 years.
Veniez said, “It’s time to change the paradigm to think and focus on the fundamentals, we’ve got a rotting fibre basket.”
Posted by . at 12:04 am

Labels: Dan Veniez on the forestry