By our name they shall come to fear us! 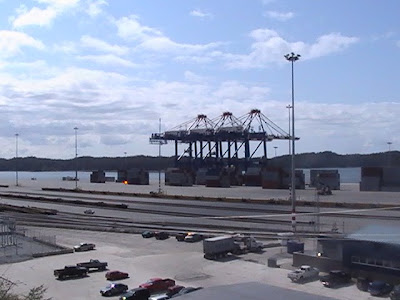 The arrival of the Port of Prince Rupert on the international shipping scene seems to have spooked our friends below the 49th parallel just a little bit.

Over the last week or so a couple of news items have popped up across the Podunkian newswire that show that the Fairview Container port is being perceived as a rather looming threat to the business models due south of Vancouver.

And while the mere mention of our name dosen’t quite have the same cache nor fear, as say a Keyser Söze, there is interest in what we’re up to and how it may affect the lives and incomes of port workers in America not to mention increase the amount of time that Americans will have to wait for these Northern monster trains to pass by .

And as the American economy continues to slow down and the protectionist drum beat begins to beat anew in the US, it’s something we’re sure that will be made of note to Governors, Senators, Congressional leaders and maybe even a Presidential candidate or two.

While some of the reports may have their facts a little off (we haven’t quite dropped to 5,000 soggy souls yet, but hey maybe they know something), the theme of competition is one that certainly has become the currency of the day for US ports.

Monster trains coming down the tracks?
Drivers stuck at crossings could see 2 miles of rail cars
By Richard Wronski
Chicago Tribune reporter
August 12, 2008
Call them freight trains on steroids, monster trains double-stacked with containers, long enough to block every rail crossing at the same time in some Chicago-area communities.

Many suburban officials fear the number of such lengthy trains will increase if a plan to divert transcontinental freight traffic through their communities is approved.

In Barrington, one of these 1.5-mile or longer trains could shut down all four crossings simultaneously, said Village President Karen Darch, who worries that even longer behemoths are in the offing.

Darch and other suburban leaders fear their towns will be perched on a railroad superhighway if the Canadian National Railway is successful in its $300 million bid to purchase the Elgin, Joliet and Eastern Railway. They worry that 20 to 40 of these super-size trains will roll through their communities each day.

Inevitably, trains of such sprawling length would lead to delays for motorists hung up at crossings, officials say.

Freight trains on the EJ&E now average about 2,600 feet, about half a mile long. But a CN presentation to analysts in June talked about trains that would run up to 12,000 feet—well over 2 miles long.

Longer, faster freights are the industry's watchwords, experts say. And CN says its plan to bypass Chicago's rail gridlock will mean fewer blocked crossings in the city and many close-in communities.

By using the EJ&E tracks, the CN says it can lower costs and speed the flow of Asian products from its port at Prince Rupert, British Columbia, to its Memphis distribution terminal and other destinations across the country. Ultimately, manufacturers and consumers will benefit, CN says.

Freight trains have grown dramatically longer over the years because of greater demand and technological improvements. There is no federal restriction on train length. The limits, experts say, are mainly logistical, such as the capacity of rail yards and sidings.

Normally, trains are assembled car by car in a freight yard, depending on the type of goods and destination. But an especially long train, one that exceeds the capacity of a rail yard, might require engineers to assemble two trains and hook them together, experts say.

For the last year, the BNSF Railway Co. has been regularly running trains topping 10,000 feet from Los Angeles to the railroad's huge intermodal yard at the former Joliet Arsenal near Elwood.

"More freight is shifting to the railroads because trains are the most fuel-efficient means of transport," said BNSF spokesman Steve Forsberg. "The long-term trend is, for good reasons, to migrate more toward using rail. But . . . how is the nation going to eliminate at-grade crossing conflicts?"

The many vocal opponents to the EJ&E purchase have raised that question repeatedly. While longer trains are a boon for shippers, they may be a pain for motorists trying to get to work, or for kids trying to get to school, or for emergency responders trying to get to a fire or accident across a blocked rail crossing.

The newly released report by the Surface Transportation Board concluded that motorists would face lengthy delays at 15 rail crossings in a dozen Chicago-area communities if the deal were approved.

The draft report also identified 10 communities along the EJ&E's 198-mile arc from Waukegan to Joliet and Northwest Indiana where drastically increased freight traffic could hinder emergency responses. The document underscored the need for overpasses and underpasses at many crossings.

Frankfort has six grade-level crossings along the EJ&E where trains would increase from six to 28 a day.

In Plainfield, the CN's plan would increase the number of trains at 16 railway crossings from 18 to 42 a day, officials said. Instead of waiting for trains to pass every two hours or so, motorists there would have to stop about every 20 minutes, they predict.

Train length is only one factor in the crossing-delay equation. Another is speed.

CN says its trains will move through at-grade crossings at about 40 m.p.h. At that speed, a 6,000-foot train will activate signals and clear a gated crossing in just more than 2 minutes, the railroad said. A 10,000-foot train would take more than 3.5 minutes.

Holland said he doubts trains will travel through Frankfort as fast as the CN predicts.

CN is awaiting approval from the transportation board to acquire the EJ&E. The agency will take more public comments in writing and at a new round of hearings Aug. 25 through Sept. 11.

In making a case for the sale, CN points out that Chicago and many suburbs will see a sharp decline in freight traffic. A long line of towns from Vernon Hills to Schiller Park will see trains decrease from 19 a day to 2.

Although critics say shifting trains from one community to another doesn't solve Chicago's rail-congestion problem, others say the CN plan is a realistic answer.

Christopher Barkan, a rail transportation expert at the University of Illinois at Urbana-Champaign, says using the EJ&E as a bypass "will convert an underutilized transportation asset to a much more useful link in the national transportation network."

Barkan said public officials who have lined up against the CN proposal are being short-sighted.

"I understand people in Barrington will see an increase in freight train traffic, but there are millions of people in Chicago who will see a decrease in the same trains every day," he said. "We live in a world of trade-offs. This is one time in which the positives vastly outweigh the negatives."

Community forum focuses on harbor development
By CERENA JOHNSON, The Eureka Reporter
Published: Aug 20 2008, 11:27 PM • Updated: Aug 20 2008, 11:31 PM
Category: Local News
Topic: Humboldt Bay
With the end of the comment period on the Humboldt Bay Harbor Recreation, and Conservation District’s Redwood Marine Terminal draft business plan just one week away, local groups are continuing to weigh the pros and cons of the project.
The Humboldt County Rail and Port Infrastructure Taskforce held a forum in the Wharfinger Building Wednesday night to highlight issues related to developing the port.
Panel speakers included representatives from the harbor district, Goldman Sachs, Ports America, Pasha Group, and the local oyster industry, as well as a former North Coast Railroad Authority executive director.
“We are in need of good jobs with benefits,” said Bill Bertain of RAPIT. “We’re talking about doing a green port and a green railroad, and it can be done,” he said.
The proposed marine terminal plan proposes construction of a multipurpose berth designed to accommodate cruise ships, cargo shipping, historical attractions and aquaculture, with long-term expansion requiring private investment and operation of the railroad.
Goldman Sachs has proposed to act as the district’s financial advisor to attract private funds for the project, though negotiations are ongoing.
“Our goal is to serve the district in whatever function the district desires,” said Eric Zampol, Goldman Sachs associate with the firm’s public sector and infrastructure banking group.
In developing a terminal, Zampol drew a parallel to the port of Prince Rupert in Canada, with a population of less than 5,000 residents, to serve as a gateway for goods shipment.
Dan Hauser, who formerly served on the Arcata City Council, and as executive director of the NCRA and general manager of the Northwestern Pacific Railroad, addressed what he said were a number of “myths” regarding the closure of the railroad through the Eel River Canyon, including closure due to geologic conditions.
“That is absolute bunk,” he said. “There was nowhere to go when the south end was closed down,” he said, due to flooding and washouts, and said restoring the railroad would be more cost-effective than constructing an alternative line, and would not require the NCRA to make a profit.
“We’re very interested in seeing what can be done here,” said Glenn Yamaguchi, executive vice president of the Pasha Group.
Once the harbor district closes public comment, TranSystems will review the comments on the business plan and revise the plan, after which the district will consider it for adoption, and will then initiate the California Environmental Quality Act process, Hull said.
(Cerena Johnson can be reached at cjohnson@eurekareporter.com, or at 707-269-7440).

Seattle Officials See Canadian Ports As Competitive Threat
08/24/2008
Although the slump in the national economy may be to blame for the current cargo declines at the Port of Seattle, commissioners there fear that competition from Canadian ports may present even greater challenges in the future.
"For years, our major competitive threat was from the ports in Southern California, but today we face an even stronger threat from the seaport in Prince Rupert, Canada," Commission President John Creighton told the Seattle City Council last week during a special joint work session. The Canadian government is pumping $3 billion into Prince Rupert's development, and Canadian railroads are investing hundreds of millions of dollars in the rail network. Prince Rupert is one day closer to Asia than the Pacific Northwest, and the port is developing as an intermodal port that will carry cargo to the U.S. Midwest.
The port commissioners told the City Council that their dockside terminals have the capacity to double their container volumes to 4 million TEUs. "The challenge is getting cargo over the Cascades and to the Midwest faster than Prince Rupert and Vancouver," Creighton said.
-- The Cunningham Report
Posted by . at 12:49 am